FutureHear's goal is to change people's lives by providing personalized prosthetics. Thanks to 3D printing, this project out of Brisbane, Queensland, Australia is creating low-cost ear prosthetics for children who were born with microtia, a condition affecting 1 in 6,000 children whose ear has either not formed at all or is only partially formed.

FutureHear's goal is to change people's lives by providing personalized prosthetics. Thanks to 3D printing, this project out of Brisbane, Queensland, Australia is creating low-cost ear prosthetics for children who were born with microtia, a condition affecting 1 in 6,000 children whose ear has either not formed at all or is only partially formed.

“3D printing allows us to make things personalized,” Mia Woodruff, an associate professor at Queensland University of Technology, said. “It's a technology that everyone's adopting, and the [LulzBot 3D] printers are just so reliable and low-cost compared to other manufacturing techniques.”

LulzBot 3D printers are being used in the first phase of the FutureHear project, which is a collaboration between Queensland University of Technology and Hear and Say. 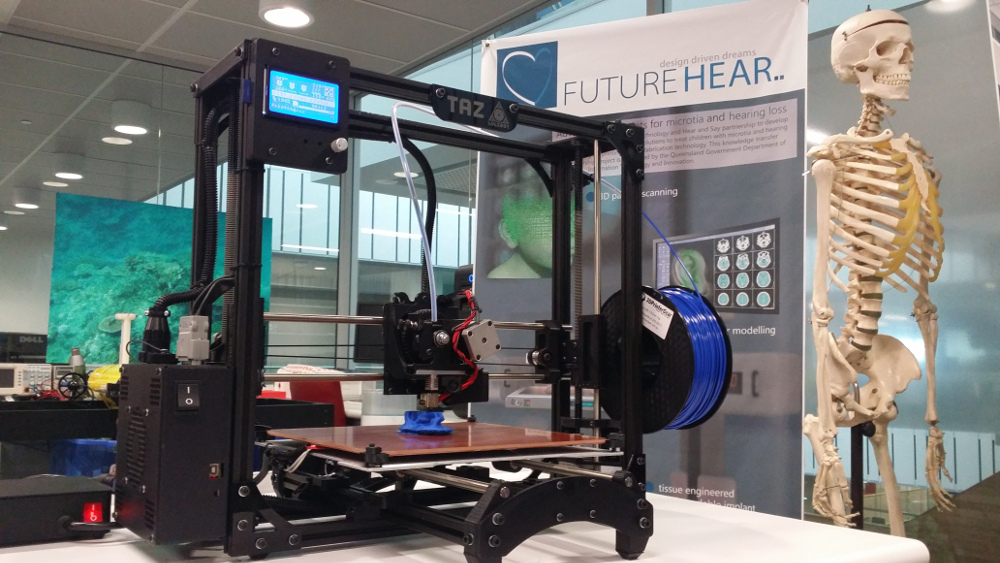 In phase one, photogrammetry is used to scan the child's ear with a smartphone, making a three dimensional file. A reverse mold is then created and printed using a LulzBot 3D printer, and into that mold goes medical-grade silicone to ultimately have an anatomically precise ear matching the other side of the child's head.

The second phase of the FutureHear project will focus on making tissue-engineered, permanently implanted ears. The third phase will look at creating bionics with functional hearing components that are integrated into the ears.

“FutureHear is about future hearing, and it's about the future lives of these children to make them have exactly the same opportunities that all the other children have,” Woodruff said.

[Watch one child who FutureHear is helping.]

In addition to making the molds, LulzBot 3D printers are starting to use NinjaFlex to make the internal cartilage structure for FutureHear.

Regardless of the application, using LulzBot 3D printers in FutureHear has had many benefits.

The fact that LulzBot 3D printers are robust and can withstand movement and use is an additional advantage.

“We take them to a lot of showcase events,” Woodruff said. “We've taken them to at least five, and they've never malfunctioned, they're easy to level, and the cost is so incredibly competitive. They are the reasons we stick with it, and we just have such nice interactions with the company.”

In order to try to see the work with FutureHear into the new year, a crowdfunding campaign was launched.

As FutureHear works to change the lives of these children, 3D printing remains a vital tool.

“3D printers are amazing,” Woodruff said. “They're revolutionizing the world; to see how it can be used to have an impact on someone's health and well-being is quite incredible.”

Learn How Others Use LulzBot 3D Printers For Prototyping ➡